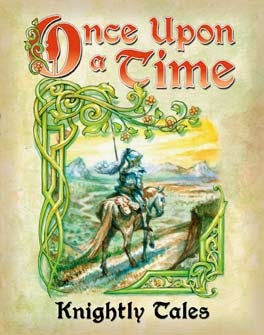 It’s been 20 years since the first release of Once Upon a Time and ever since, the game has been encouraging players to tell fantastic tales of wonder and adventure. Along the way, it evolved through two new editions, inspired expansions, and won awards. And now the story continues!

We’ve recently released Knightly Tales, a new expansion for Once Upon a Time that provides players new resources to create stories of brave knights, clever maidens, and perilous quests in the age of chivalry.

Knightly Tales includes 38 new Story Cards. Each brings a classic element of medieval legends to the game. Some represent the characters who will populate these stories, such as the Squire or the Wizard. Others represent places where stories will occur, such as the Pavilion or the Tournament Field.

The expansion also includes 17 new Ending Cards that provide players with conclusions for their tales. As always, the first player to play an Ending Card wins the game.

Once Upon a Time is a fun and inspirational game of storytelling for two to six players, suited to both kids and adults. All the action and Ending Cards in the Knightly Tales expansion are ungendered, so girls and boys have equal opportunity to be the hero. It’s a great game for parents to share with their children.

If you’re not familiar with Once Upon a Time, check out our overview video, or the TableTop episode that features the game, on our OUAT line page.

You can learn more about Knightly Tales on its product page.